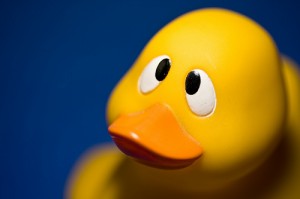 Here are the first five:

This is when some shiny new piece of technology comes along, and everybody immediately declares it the best thing ever. Those suffering from baby duck syndrome immediately ´imprint´ on the new technology, and have issues with ever letting go. Even when flaws become increasingly apparent, those suffering from baby duck syndrome will defend the technology to the bitter end. I learnt about this cool term via an item in Stephen Downes´ (very addictive) Online Daily.

An entire area of study which investigates (and rather scarily experiments with) how we can integrate machines/technology into the human body. I’m waiting for the French chip to be developed, so I can graft it into my memory and give being up the really hopeless learner of my French class. I learnt about this term in my MOOC (see below), and the field has apparently been around for decades (see this video), although it was all news to me. I do love the term though.

Trawling around Wikipedia recently, I was reminded of the heated discussions that arise over obscure things. Like the heavy metal umlaut. The what? It’s the use of those double dot diacritic marks over a vowel, much beloved of heavy metal groups such as MotÖrhead. Check out more on this fascinating topic, and bore those Christmas dinner guests rigid.

In a misguided attempt to get some professional development via anything longer than a tweet, I signed up for a MOOC in September. I promptly dropped out at record-breaking speed, unable to keep up. Some of the information I managed to follow did slowly filtered through though. The course was directly instrumental in me writing series of blog posts about Webs 1.0, 2.0, 3.0 and extended web, for teachers. So really, I was a model  MOOC student – I repurposed course content into meaningful artefacts for myself and the wider community. How cool is that? You can do almost nothing on a course, drop out within minutes, and still feel good about it all.

This is a term we’ve all known about for yonks. But I learnt that the issue of cyberbullying is not restricted to undersocialised teenagers. It was not my 14-year-old daughter who reported a case of cyberbullying in school. No,  it was my 40-year-old-+, extremely tech savvy colleague Gavin Dudeney’s experience of cyberbullying which was a real eye-opener. If you haven’t read his blog post about his recent experiences, you need to do so immediately. It just goes to show that we are all potential targets, and that there are some very unpleasant people out there. But the (cool) flipside is that his entire PLN turned out en masse to offer their support. The post has 127 tweets and 101 comments to date…

What cool things have you learnt in 2010? I would love to read about them in the comments section below!