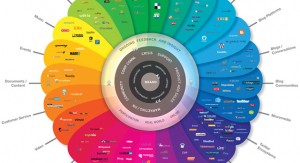 I learned about the site Visual Loop with via Twitter. Find infographics on a range of topics, from Recaps of 2010 to Worldwide Christmas and New Year’s expenses. A great resource to visually spice up those presentations and blog posts. And infographics can be truly stunning – take a look at these 10 beautiful infographics identified by Mashable.

Another cool term I came across in 2010 (although it has apparently been around since 1983). Vaporware refers to software products that have not yet been released, or may not even exist, although I like the term when applied to products that simply don’t live up to expectations. Remember Google Wave? One of the most overhyped and underwhelming products of 2010.

Something well-established in countries like Japan, QR codes have yet to make a big impact in Europe. My discovery of QR codes inspired me enough to blog about it here, and I recently came across a useful Brief Reading List on QR codes via Twitter. Revealingly though, on a trip to Japan last month, I didn’t find myself avidly reading QR codes on my iPhone – it just seemed like too much hassle. One wonders if they will ever become that widespread. And they just look so…  off-putting. Indeed, this post from the Mobile Learning blog suggests that they will inevitably be replaced by mobile applications that easily read more human-friendly images and text.  But hey, QR codes were new to me in 2010.

An area which is clearly here to stay is augmented reality (AR). One of my favourite posts about AR apps is from the Shiny shiny blog, which shows screenshots of cool (and weird) AR apps – including a bug squashing app for those long waits on hold trying to contact your mobile provider.

Recently made available to the general public, and incredibly easy to use. Making apps looks like child’s play on Google’s Android app inventor – just look at this demo video. I’ve been waiting for a reason to make iTunes a distant memory, and this swings it for me.

Please feel free to add one or two things you´ve learnt about in 2010, in the Comments section below. Thanks!