[Reflections on an online training course]

Three days ago, Penny Hum´s class was conducting a physics experiment to investigate lenses. She spotted a pair of students using a mobile phone so went over to check. They were using the screen as an object, trying to see if they could create an image from it. She didn´t tell them to put the phone away. “They were clearly more engaged by using the phone in their practical than using the lamp I had provided” she says.  “Both students were surprised when I not only allowed then to continue to use the phone, but chatted to them about [our mLearning course] and how I was learning how to bring more mobile technology into the classroom.  I had a longer discussion with those 2 students than I have ever elicited from them before”.

This was my first experience of running an online course with such a large group of people. Our own online courses have a group maximum of 15! And that´s a big group for us! So to have almost 20 times that number has been a bit of a shock. But, as is typical in MOOCs, the level of lurking (after the first flurry of introductions) has been fairly high, and communication has tended to revolve around a core group of around 30 – 40 participants who post and interact daily. I personally have no problem at all with lurking. I think it is equally valid learning activity for many participants. And it made reading and replying to forum postings more manageable for everyone.

The course has run for exactly 7 days, with one short task of approximately 30 to 45 mins per day. The vast majority of the participants are busy full-time language teachers. I have been simply stunned by the level of engagement shown by the participants, and the high level of discussion and thinking that goes on. Like Penny, several of the participants have had eureka moments.

During the course, those of us who are regular users of Twitter have been using #mobseeta (mob as in large group, and mob as in mobile – very cunning) as our hashtag. On Day 1 of the course I set the following twitter challenge: to post one learning point/insight gleaned from the course daily, in just one tweet. Here are some of them! 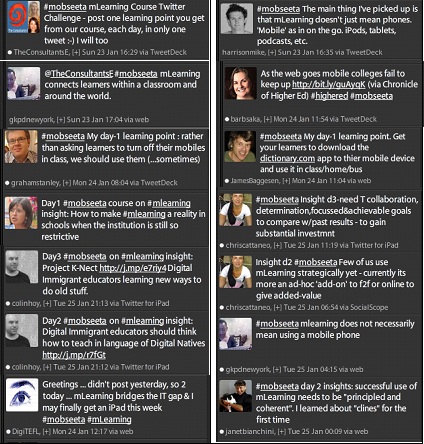 The course is one week long, and we are nearly finished. The turnout has been quite astonishing. I really did count the countries the participants come from – there are 58. I’m not sure we’ve quite reached the status of a MOOC*, but we´re a pretty large bunch! Perhaps we´re a mini-MOOC.

[*a Massive Open Online Course – these can typically run into the thousands of participants on one course. More on MOOCs here.]

Overall working with such a large group has been a fantastic experience for me. I have learnt a huge amount about a wide variety of teaching contexts, and have come in contact with some very good teachers. I´ve also been privileged to witness teachers like Penny having insights and new experiences in their classrooms, which they have chosen to share with us. And the huge (to me) number of participants hasn´t actually turned out to be as draining as I thought. Within minutes of the course starting, participants were interacting and communicating, offering suggestions and advice, and generally supporting each other. I suspect I could have been run over by a bus on Day 2, and no one would have noticed I was missing 🙂 And that is definitely the hallmark of a successful (mini-) MOOC. Thank you to all who have taken part!

[Note: This free SEETA Intro to mLearning course is open and available to anyone, for the foreseeable future. I hope it will be a useful resource for those interested in the basics of mLearning, and specifically how mLearning relates to (English) language teaching.]