[or: An APPetite for learning – guest post by Neil Ballantyne]

Based at the British Council Hong Kong, Neil works with a team developing web products and smartphone apps for learners and teachers. In this guest blog post, Neil gives us a great overview of the smartphone apps out there right now for English language learners. Teachers and learners, take note!

Nicky mentioned a few ways learners are using their mobile phones to help them improve their language skills. This post will focus on a number of the smartphone apps available to language learners. 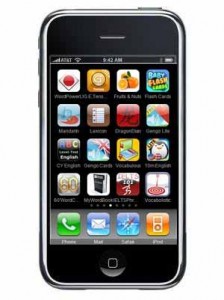 There are so many apps it is impossible to keep on top of all of them so please use the comments box below to suggest other useful apps for language learners.

The focus below is on iPhone and Android phones only, if only for the simple fact that I possess these phone so have access to the apps, although they are by far the two largest app markets at the moment.

I have structured this review into categories, looking at dictionaries, language games, vocabulary and grammar focused apps, flashcard-based apps and courseware.

There are a lot of dictionaries available from the app stores. A lot of these are web-based apps requiring an internet connection. Essentially these are just applications that render the web content in a phone-friendly manner.

There are loads of word games available both for the iPhone and Android from word-searches to Boggle-type games. A couple of noteworthy apps aimed specifically for the language learner come from the British Council.

Put grammar into the iTunes App store and dozens of titles appear – all much of a muchness, working around the concept of testing discrete items within a range of question types (usually gap fills or multiple choice). 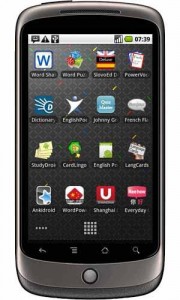 The flashcard genre works on pretty much the same principle across the apps. A card is presented with a phrase or word. On the reverse is either a translation/picture/sound file. The sophistication of the products vary wildly from those that simply present the words to those that can remember which words you are struggling with and force these to be revised more often. They generally work well in the phone format; an easy three minute killer to practice a set of words, either browsing through the flashcards or being tested on recall from a sound phrase.

Smartphones lend them selves to short bite-sized interactions so it is interesting to see what developers are looking at with regards to courseware.

Finally, considering this blog is aimed at e-Moderators, there are a couple of apps and projects running at the moment for putting Moodle onto the iPhone.