Mobile devices in EFL: What do students think? 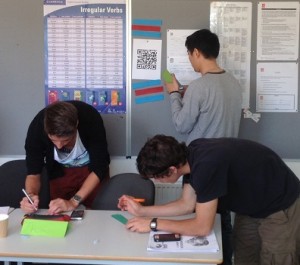 What do EFL learners think about working with mobile devices in the classroom? Does it make them more motivated? Do they participate more in class? Does it improve their English? Is there evidence for any affective improvements?

This blog post describes the findings of learner surveys on this, as part of a research project for The International Research Foundation in English Language Education (TIRF).

Who were the learners?

The project had students using their mobile devices to carry out communicative language learning tasks (we also used a course book). It was carried out with two consecutive small groups of international EFL learners studying at a private language school in the UK, over a period of two weeks in July 2013.

What mobile devices did they use?

A BYOD (bring your own device) approach was chosen because the likelihood of most – if not all – learners owning smart phones or tablet computers was very high. This proved to be the case, with all learners in both groups owning smart phones (iOS, Android and Blackberry, with a majority of iPhone owners), and one tablet owner. Private language schools in the UK tend to attract students who can afford these devices, with professional adults attending, and adolescent learners coming from relatively wealthy backgrounds.

In the first class of the week, both groups completed an online survey designed to check what learning experiences they may already have had using mobile devices, what devices and connectivity they had with them in the UK, and to gauge their attitudes to the idea of working with their devices during the coming week. In terms of attitudes and experience, the results of this initial survey were very similar for both groups:

The end of week survey

An end of week survey was given only to the intermediate group, on the Friday of week 2. The survey contained questions focusing on the use of mobile devices, including whether they enjoyed using their devices overall, whether they found it useful, and soliciting comments/feedback on individual activities carried out in class.

It was decided not to administer the survey to the post-beginner week 1 group for a number of reasons:

What did the learners say?

Here’s a downloadable PDF Survey Summary for the intermediate week 2 group. It shows:

But probably the most interesting thing this survey shows is:

Caveats: What are the limitations?

The questions posed at the beginning of this blog post are clearly large questions for a very small study. So here are the caveats:

Is there evidence for any affective improvements from the use of mobile devices?

But these conclusions can only be applied to these learners, in this context. How about running your own classroom research project to find out what your learners think?

Please feel free to leave me a comment with your thoughts. Do your own experiences with mobile devices reflect my findings, for example?