Intro to QR Codes: A lesson for EFL students 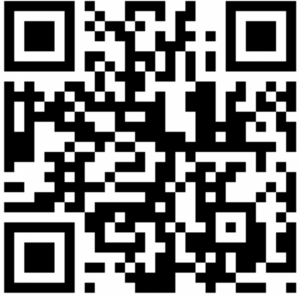 I’m currently in Cambridge in the UK, doing two weeks of EFL classroom teaching. Because…

One area I’ve been experimenting with is the use of QR codes with my learners here in Cambridge.

Last week I taught a group of beginners/pre-elementary students for 3 hours every morning over 5 days. I used QR codes in two separate lessons. The first lesson reviewed language, and introduced the class to QR codes (in preparation for a more complex lesson involving QR codes in a subsequent class – blog post on that to follow!)

Before reading on, if you want to review what QR codes are and how they work, read this blog post: A Dummies Guide to QR Codes

Here’s how the lesson with my beginners worked:

1. I showed the students the QR code at the top of this post, and asked what it was. Although most of them had seen QR codes, none of the students were sure what they did. None had QR code readers on their smartphones.

2. I asked the students to download the free QR code reader i-nigma (the best, imho, and it works on Blackberry, iPhones and Android phones)

3. Students then used their newly downloaded QR readers to read the QR code I had shown them in step 1. Lots of gasps of surprise when a short text appeared on their phones! Read it yourself to see what the message says …

4. I then put this QR code, plus 3 more I had prepared and printed out before class, around the classroom walls.*

* The QR code at the top of this post says: What are 3 of your favourite foods? The 3 other codes I prepared before class used the same simple structure, and reviewed some of the vocabulary and language we had worked on in previous classes:

I made the codes using the free QR code generator site Kaywa, and chose to generate ‘text’ messages

5. Students individually read each QR code message with the readers on their phones. For each, they picked up a strip of paper, wrote their own answers to the message/question, and stuck their answers with blutack on the wall next to the QR code. I noticed that the learners worked hard at this point, and were fully engaged and on task – even those students who normally struggled to keep up in class, or were generally fairly unmotivated (yup, it was a challenging class!). 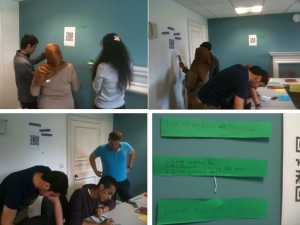 6. Once this stage was complete, I nominated four students to each take down one QR code and the surrounding replies on the strips of paper.

7. Each of the four students read out the message/question, and the responses, pausing so that the class could listen and guess who had answered. Even the very weak students were making an effort to understand and guess which classmate had replied what to each QR code message.

8. We extended the activity by having the students in pairs produce oral sentences about their classmates from what they could remember e.g. Saud enjoys going to London on weekends, Ilya’s favourite food is Italian and Chinese food, etc.

In essence this was a simple review activity, and combined (very low level) reading, writing, listening and finally speaking, structured around 4 similar open questions. The students worked hard in this lesson, producing as much language as they were capable of.

Did the integration of QR codes make any difference? I could easily have put the text questions themselves directly on the walls.

But my perception during the lesson, and from the learners’ comments afterwards, was that they were more motivated throughout. No doubt the novelty factor helped, but they also gained a useful digital skill to apply outside of class (reading QR codes). Some of the students also commented that they liked the mystery or ‘secret message’ element of the codes, and that you needed a special tool (a QR code reader in this case) to decipher them. But most important of all, they produced language and practised a range of skills: reading, writing, listening and speaking. And that, rather than the QR codes, was the main aim of the lesson.